The size of Banks - Information type

The banks normally generates information in order to solve asymmetric problems through standardized processes, technology investments and formal procedures (hard information); and personal relations (soft information)17. Each one of these two different processes has a generation and maintenance costs associated to the structure of the bank and thus to the scale economies (Berger and Udell, 1995; Ogura and Uchida, 2007). As mentioned before the fixed costs of information are independent from the amount of the loan: at the same quality of information the structural costs needed to support the steps of searching, generating, analyzing and making decision (e.g. risk department, branches) doesn’t decrease in the same proportion when the amount of the loan decreases, the situation is the same when the average amount of loan
increases. An example of this is the time spent on a project, that in fact depends on
complexity more than in the amount of the loan involved (the same can be assumed for other resources spent as personnel or information needed).

Now, we’ve seen in Table 2 that smaller banks had more presence in the SMEs financing than larger ones, this is explained mainly due to the efficiency information
produced by each institution in relation with his structure. As some empirical studies
suggests (Carter, 2002) the small banks make better choices from the available small
business loans, mainly because they’re better processing credit information than larger banks. This idea could have correlation with the research of Ogura (2007) in which they found that smaller banks produces more ‘soft information’ than larger banks, and this information has more presence in the evaluation of small business (see Table 4).

Our general idea is that larger banks produce more ‘hard information’ and
they’re less able to work with SMEs due to the presence of fixed information costs
(mainly ‘soft info’) which make almost impossible the economies of scale (see Figure 5).

Table 4. TENDENCY TO GENERATE HARD AND SOFT INFORMATION AS
PER BANK SIZE. JAPAN. 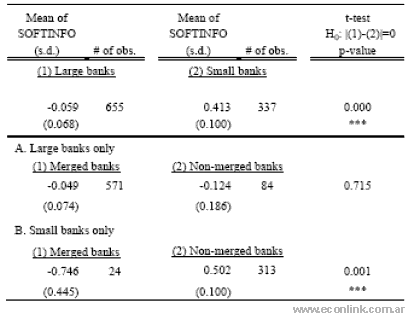 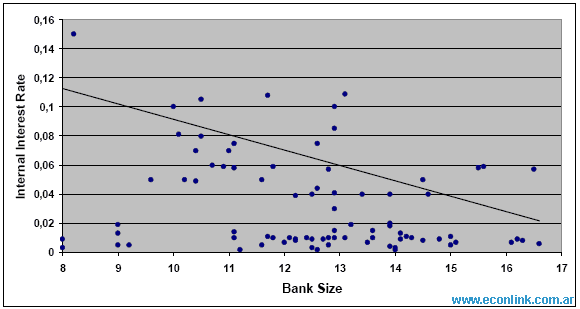 At this point we’re going to make a parallelism with the results of some works:
Carter (2002) found that the smaller banks had higher risk adjusted-yields than large
banks due to their exposure to smaller business but curiously the risk adjusted-yield
decreased as the small business loans increases in the total portfolio, the reason given by
the work was that the smaller banks have a combination of information advantage and
relationship development; in this work we’ll classify these factors as ‘soft information’
(as the definition of Ogura). In the same way Kanatas and Qi (1998, 2003) relates the increase in the cost efficiency of lending as a result of a previous lending relationship
with the customer, ‘as the time increases the information increases’.
The mechanism would be: longer personal relations generates soft information
that decreasing ‘information asymmetries’ provokes a decrease in the interest rates
applied. Then smaller banks due to their particular structure and closer relation with
customer can obtain economies of scale or considerable improvements on cost
efficiency.

The question is which kind of information is effectively used to reach
economies of scale: even recognizing a mixture of hard and soft information in every
entity, we can say that larger banks will be more based on hard information generation
processes and smaller banks in soft information ones. The ‘hard information’ generation allow economies of scale through formal procedures, complex risk rating systems, sophisticated computational systems and increasingly complex organizational structures that are adequate for larger operations but not efficient for small lending and that in most of the cases are unaffordable for small entities. An anecdotic evidence can be observed in the Spanish banking system where larger banks policy is focused on the creation of ‘bank agencies’ not depending directly to the bank (like in the insurance industry) in order to substitute the traditional branches structure and improve their efficiency (and profit) through a decrease in fixed costs. In fact this is an inverse process to concentration in which the bank delegates the managing of regional operations in third party agencies, which normally manage more ‘soft info’ delegating the ‘hard info’
to the bank.

An evidence of the scale economies obtained through the development of ‘hard
information’ production can be checked in Maudos, Pastor and Quesada (1996) where they found that due to technological improvements the Spanish Saving Banks obtained an annual reduction of 0.64% in average costs and 1.93% in operational costs from 1984 up to 1994. In the same way Altunbas and Molyneux (2001) found that this factor was responsible of an annual reduction of 3% average in the credit costs of the entities in the UE from 1988 up to 1995.

Following the theory of Eugene Fama on his ‘Efficient Market Theory’ and the levels of efficiency18 we’ll present the information efficiency as per bank size in the following chart:

· Size of Bank:
Banks size as per total assets related with the market average.

· Type of Market:
Market with weak information efficiency: we found little information and of bad
quality. `Information asymmetries' are quite abundant and sometimes structural. The
cost of financing are very high and the competence is almost inexistent. An example can
be the market of credit of the SMEs in the sector of largest banks, nevertheless this is
the typical characteristics of the IFS (Informal Market) in marginal regions, in the case
of Argentina is represented by the SME sector of less developed provinces.
Market with semi strong information efficiency: we found a situation intermediate in which the information can be of good or bad quality, abundant or scarce
or of an intermediate point, in this case will depend almost completely on the
intermediary agent. The gaps between interest rates applied can be significant and the
grade of competition depends on the particular segment or situation. An example we can
find it in the great urban centers within the Argentine market, where the concentration

of capital and information created intermediate situations, some banks obtained
informative efficiency managing the portfolio of SMEs and others not. A peculiar

example is the case of the local mutual companies that, working within the informal
system (IFS) obtained a surprising informative efficiency dealing with apparent very
risky companies.
Market with strong information efficiency: the generation and distribution of
information are obtained at very low cost, in time and suitable form. The interest rate
gap is almost inexistent and the competition is close to perfect. The typical case is
represented by the capital market, nevertheless the credit portfolio of ‘prime’ companies
as the privatized ones are another example within the banking sector.

Hard info: Information generated by standardized process and systems, standard
operational procedures, computational mechanisms and other formal procedures. A
typical case is represented by the ‘risk measurement systems’ that large banks are
required to develop and have to be approved by the central banks.

Soft Info: The main source of information is obtained through personal
commercial relations along the time. It’s extremely influenced by the proximity to the
customer and the amount of time, the increase in both factors leads to an increase of
quality and quantity.

Mix Info: The information is generated and maintained by a mixture of both
types. Normally related with geographical factors that allows a centralization of
operations along with a good coverage by branches. The regional banks are a good
example of them, even in some cases they have standardized procedures applied to the
main industry of the covered area and at the same time the commercial department has
close relation with the main producers/customers.

At the end of this section we want to mention some results obtained in recent
works about asymmetric information and requirements of collateral to the SMEs, since
it is directly related to this subject. At the beginning of this decade arose what is called
`Lazy Banks Hypothesis’ according to which the bankers do not monitoring the emitted
loans to SMEs if they have high collaterals from the companies. The idea in general is
that the risk of ‘not monitoring’ is covered by the collateral. Although the hypothesis is
strong, the empirical evidence is not so clear. Some authors like Franks and Sussman
(Franks J. and Sussman O., 2003) supports this theory based in a field work made in the
United Kingdom that threw positive results. Other authors, mainly Japanese (Ono,
Yanagawa, 2003), put in doubt the theory and adduce that the problems are provoked by

deficiencies of the western legislation at the time to face companies financial distress.
Nevertheless from our point of view we’ll suggest as base evidence the work made by
Berger (2007) and people of the Federal Reserve of E.E.U.U., in which they found
strong empirical relation between the availability of information of a borrower and the
collateral required. Over the sample of 14,000 new loans set to SMEs they detected that
the requirements of collateral were smaller as the information gap in between the
borrower and the bank were reducing.

Note: Following the accepted works about credit rationing like Stiglitz and Weiss
(1981), Greenwald and Stiglitz (1986) and Jafee and Stiglitz (1990) we can understand
why a bank classify customers based on imperfect information and the consequent
credit rationing via amount, access or price, but it doesn’t mean that this type of client is
classified in the same way by a small bank since the information available in it causes
that the bank evaluates better the risk that takes, therefore the risk perception can be
smaller shortening ‘information asymmetries’.